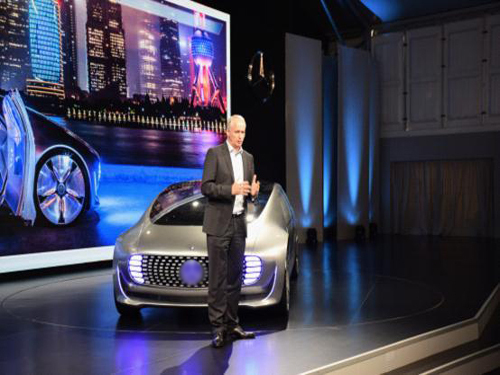 For those interested in the CES Consumer Electronics Show, this year's CES auto category in Asia will not be a little hot, because at the beginning of the year, the United States CES has already shown this trend; but for the impression of people still only in the "consumer electronics" stage It would be a bit inexplicable, and it seems to have become a half auto show. In fact, in a word, automotive technology has already jumped out of the category of traditional cars, becoming part of the smart concept and becoming part of a mobile life like a mobile phone. From the United States to China, the explosion of cars at the CES show illustrates one thing: cars and technology are getting closer together, and its home court may have changed.

One reason: No manufacturer does not attach importance to the Chinese market

The common point in the automotive and technology fields is that the market is more and more biased toward China, which is illustrated by both sales figures and the first-generation models. In fact, when we talked with Dr. TOM COUGHLIN, the chairman of the IEEE Western United States, he also mentioned this point, that is, the Chinese market is getting bigger and bigger.

In terms of the car companies participating in the exhibition, Mercedes-Benz, Audi, Ford, Volkswagen, Cadillac, etc. all mobilized, and almost every car company held a separate conference or event. Compared with the Shanghai auto show one month ago, the scale was not Inferior. Mercedes-Benz also took the unmanned concept car F015 unveiled at CES to the show this year, and its last appearance was also at the Shanghai Auto Show. It can be seen that the manufacturers pay great attention to the Asian CES.

Audi is even more direct: Chinese owners are young and rich (capricious?). Audi had done a survey. The average age of its owners was 53 years in Europe and 51 years in the United States. The average age of Chinese car owners is only 36. The younger owners are an important driving factor for Audi's deep optimization of Chinese users. Audi requires the development department to make more optimizations so that the car entertainment system can be better adapted for Chinese.

Although there aren't many premiere models that appear, but in fact, manufacturers will combine the atmosphere of CES and try their best to build their own technology and equipment. Many of these technology and equipment are individually customized for Chinese car owners, or simply use localized services, which shows that they attach importance to the Chinese market.

Reason two: What is needed is the taste of science and technology

In fact, many people in the industry now have a consensus that the development of the traditional automotive industry has encountered a bottleneck, while the next export is a car technology represented by new energy sources, car networking, automotive interconnection, and driverlessness, and it is the second-rate technology event. It must be CES.

For CES, regardless of exhibitors, supply chain, media, or audiences, there is a strong technology atmosphere. This is the car company that focuses on the concept of the car wants to see, and is different from the auto show â€œcar model and the thigh fly together, local tycoons have a total of banknotes. As for the "green economy" that lacks practical significance, CES is obviously more focused and professional.

My greatest feeling at this Asian CES show is that the localized car connectivity technology led by Baidu CarLife has matured. Almost all participating car companies have taken prototypes to display, for a platform that has just been released several months ago, This speed is amazing.

From the Mercedes Benz the day before, to the Audi and Volkswagen that followed the launch, these German car companies are launching the technology carrying Baidu's CarLife at the same time. For the models launched for China, there are no occasions that are more Asian. CES is more suitable for the debut of these technologies.

I have conducted in-depth trials of these three car-connected products and have conducted detailed exchanges with their personnel. I was surprised by two things: First, the speed is very fast. Basically, we will see the new platform next year. The product was sold on the vehicle, and the previous argument was 3-5 years. It can be seen that the car companies also accelerated under the influence of the Internet tide; the second is the attitude is very open, and it is known that all three Mercedes, Audi and Volkswagen are Having its own in-vehicle connectivity platform and doing it well, accepting third-party platforms is not easy, but what I see is that they are compatible with Baidu CarLife, Apple CarPlay, and Android Auto. Yes, they all play It is a combination of three-in-one like boxing, many people will ask this to let users choose? The answer is still the two words: open.

At the Audi booth, the staff revealed that the next-generation Q7 and TTS will carry these smart platforms. They are seamlessly compatible with Audi's original MMI system. Users can automatically launch CarPlay or Android Auto by plugging in Apple or Android phones. Baidu CarLife You can manually enter in the main interface, be a localized special function. Of course, these third-party platforms can also enjoy the driver's hand-held knob or tablet manipulation of the treatment, just like the operation of the original MMI.

In fact, Baidu CarLife is just a microcosm of the car-connected platform. In the past six months, many Internet companies have come up with their own products. It is believed that the strength of this area is second to none in the world. Therefore, Asia CES is the best stage for their debut. .

The same favored with the car-connected technology is the new energy, this time the majority of exhibitors in Asia's CES companies have also introduced mixed or pure electric models, the most active is the Volkswagen, and even began to layout wireless charging.

The development of new energy vehicles is inseparable from the support of national policies. For imported new energy vehicles, there are already many cities that offer treatments that are not limited to lines, are not tils, can be driven in public transport lanes, and even offer subsidies on prices. The tilt of the policy has caused international car manufacturers to rush, so on the street in Shanghai these days they can see a lot of new energy cars that have not been seen before and become a mobile exhibition.

Reason 5: The interaction between technology companies and cars

The taste of science and technology in Asia CES is undoubted, and automotive companies especially like the tacit interaction with technology companies. This subtle connection is precisely the subtleties of CES car companies.

For example, the built-in China Mobile 4G LTE network chip promoted by Cadillac and OnStar has actually been told by China Mobile on the other side. The car networking that many car companies like to talk about is actually the big data shared by Intel in another pavilion. This is not to mention that Asian CES has a ticket for smart hardware manufacturers around the car, and their technology is very strong, and these technologies can even be directly applied to existing vehicles.

Therefore, science and technology companies and car manufacturers singing in Taiwan at the same time in Asia CES, quite a bit of husband and wife to follow the meaning, it seems that the absence of any party can not be considered a complete CES show.

Just as it was announced at the Mercedes-Benz conference the day before, the Mercedes-Benz sedan is the most advanced IT product on the planet, but this sentence is not a patent of Mercedes-Benz, as more and more cars are becoming a model of â€œmobileâ€. "Technology products", in fact, in the course of more than 100 years of development, cars and technology have never been separated, and CES is also destined to become the largest home field of automotive technology.