Inspired by Honda's lineup of products, including automotive, marine and aerospace engines, Honda Marine will introduce a new concept engine at the 2017 Miami International Boat Show. The design concept engine will be the future of the development of marine engines. 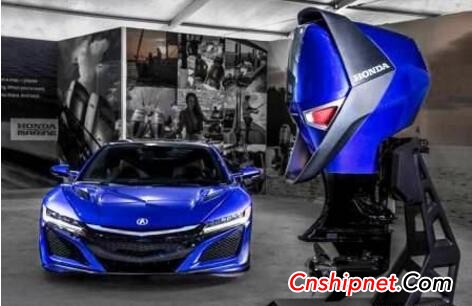 The designers of Honda's advanced design team designed a concept engine for a variety of engines. Inspired by the design, the team analyzed Honda's lineup of products, from current marine outboard engines to cars, and Honda jets. The team started with some sketches and then turned to the size and appearance of the digital modeling design concept engine.
Honda has designed a higher-level conceptual engine than the traditional marine engine. While its styling lines tie the shape engine and the shape and function of a conventional marine engine, it has the creativity to power the concept engine. Modern, technical form language will create a custom package and give the marine engine a slimmer, more vertical look.

For aerodynamics, the Honda Marine Concept Engine custom package includes an engraved center channel inlaid with a honeycomb grid. The black honeycomb network on the heating ducts on the 2017 Acura NSX supercar is reminiscent of the mix of intakes.
Inspired by the 2017 Acura NSX supercar, the concept of the engine's floating wing blades is designed in a sloping plane and overlap, so it will be designed as a floating wing blade and help reduce the overall size of the overall size, making the concept engine aerodynamic, Sleek, vertical appearance.

Previous: Â·Expert focus: the future development trend of key technologies of the Internet of Vehicles