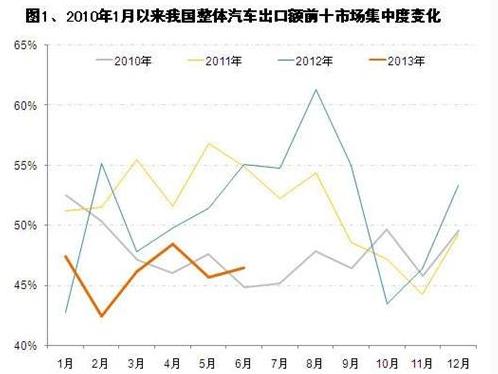 The performance of China's auto enterprises in the domestic market and overseas markets has recently been reversed. When the domestic auto market fell into a downturn in 2012, overseas exports of automobiles (referring to vehicles, the same below) increased significantly, and exports increased by 30% to exceed one million units for the first time. In the first half of this year, the domestic auto market grew rapidly, and the export growth rate was lower and even declined. Export sales decreased slightly by 0.6% to 487,000 vehicles, less than 500,000 vehicles.

Before June, the market concentration of auto exports was low in the top ten

Since 2010, China's auto export market has been mainly concentrated in Iran, Algeria, Russia, Brazil and other countries, but the ranking pattern is not stable. In the past three years, the top three markets for Chinaâ€™s auto exports in 2010 were Algeria, Iran, and Vietnam. In 2011, they were the Russian Federation, Brazil, and Iran. In 2012, they were Russia, Algeria, and Iran.

Worth mentioning is the Brazilian market, which has a large fluctuation in China's auto export market. In 2011, it had entered the top ten of China's export market for 11 months, and the accumulated amount was the second largest market for Chinaâ€™s auto exports, but due to its significant increase in automobile import tariffs in recent years. Chinese auto companies have increasingly considered or are about to achieve local production in Brazil. Therefore, in recent years, Brazil has rarely appeared in the ranking of China's top ten auto export markets. In 2012, it only entered twice, and only entered the first six months of the year.

Next: Application of DCS in fieldbus technology in thermal power plant